Many of the homes in Kensington and Chelsea, the richest area of Britain, remain empty. The largest and most valuable of them is empty much of the time. The Old Rectory on Old Church Street, Chelsea was built in 1752 and has the second largest garden in London after Buckingham Palace. It is owned by billionaire businessman John Fredriksen, who uses it occasionally between business and hunting trips in his private jet based at Biggin Hill.

The main house comprises about 30,000 square feet. With an average size of a home in the UK of 495 sq feet that means that its floor area would be sufficient to house 60 homeless people or 30 families.

The grounds are said to cover 2 acres. The property was bought for £37m via a trust based in the Isle of Man. Roman Abramovitch tried to buy it for £100m, but was told by Fredriksen to f*** off. 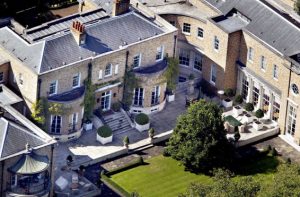 Former residents include George Wellesley, brother of the Duke of Wellington and the author Charles Kingsley. Charles Dickens was married in the living room and, it is said, the battle of Waterloo was planned in the garden. In 1994 two huge wings were added to the property which included 10 new bedroom suites and a ballroom. The house has an indoor swimming pool set within a colonnaded conservatory.

Fredriksen runs his business empire from an office in nearby Sloane Square, but pays no UK income tax.

Fredriksen is Norwegian born but renounced his Norwegian citizenship to take out Cypriot nationality for tax purposes. He subsequently moved his holdings to Jersey to avoid Cypriot tax. He still owns a farm and a large house in Norway as well as several apartments, and luxury homes in Spain and Cyprus.

He made his fortune during the Iran / Iraq war transporting oil from Iran. It was a risky operation, but immensely profitable. He was called the ‘Ayatollahs lifeline’.

Today he owns the worlds largest fleet of oil tankers as well as having a sizeable oil drilling operation. His drilling operation in the Arctic resulted in Vladimir Putin awarding him Russia’s Order of Friendship.

Fredriksen has been involved in a number of deals which have been subject to criminal investigation. He was himself briefly jailed in 1985 during an investigation into losses from oil tankers following a complaint from an insurance company. The case resulted in an out of Court settlement in which Fredriksen paid $800,000 to the insurance company and a fine of NOK 2m for putting the safety of the crew at risk.

He was also involved in the infamous Boiko (or Boyko) affair in which an oil rig was sold by one of Fredriksens companies for $250m, then resold via an intermediary for $400m to the Ukrainian Government. Kickbacks to Ukrainian politicians are said to have made up most of the difference. The Latvian Bank involved in the transaction is also being investigated for money laundering in regard to the affair.

Another scheme was the ‘operation carwash’ scandal in Brazil in which one of Fredriksens companies is accused of paying large sums through agents to secure contracts.

Fredriksen is said to control 1/3rd of the worlds farmed salmon production. Much of this has been moved to Chile which has looser environmental controls than European countries. Even so one of the companies in which he has a sizeable interest, Marine Harvest, laid off 500 workers last year in Chile because of high mortality through disease which reduced output.

Fredriksen can be impulsive and aggressive. He has been known to use his wealth to undertake lengthy legal battles against people he dislikes, with little legal justification, in an attempt to grind them down!